All UK universities now have at least one high tech flexible learning space.  Typically they have furniture that can be arranged in various configurations and wall mounted screens – sometimes interactive touchscreens – with wireless keyboards and mice.  Some, as I mentioned in the last post, have surface boards. And such rooms are not particularly new. Ten years ago I worked in a college in the Middle East with curved projection walls, jigsaw tables with power sockets, wifi and automatic window blinds and lighting.

Because these rooms tend not to be the norm they are generally not allocated to scheduled classes for an entire semester. Normally tutors book the room for a special occasion. However, this means that staff are often unfamiliar with the equipment, become anxious and then opt not to use it.  Institutions with enough IT/TEL staff might provide assistance in the teaching session but otherwise the lecturer is alone in a complex environment without help and even moving the furniture becomes an obstacle to exploiting the full potential of the room.

We have such a room – in essence four boards, four computers and moveable furniture.  In an effort to promote its use I’ve listed 20 ways to use the room on a wiki and asked staff to contribute ideas.  The wiki is here should you want to add your tuppence worth and the initial 20 ideas are pasted below:

The Basics of what you have in the room.

You have four computers and four wall-mounted screens.

You can move the furniture about – remember to unlock the wheels!

All screens are interactive touch screens.

You can display the same thing on all screens or different things.

You can choose (and change) which computer displays to the main front Smartboard screen. 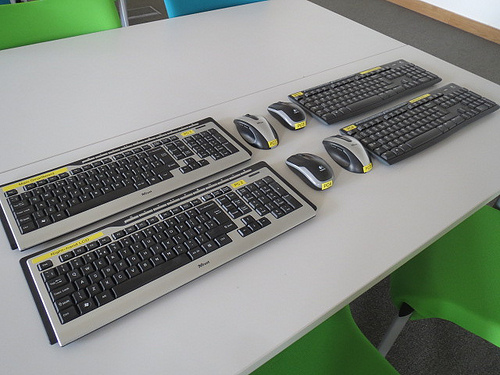 The wall screens are not huge – you cannot read text from far away.

The wall screens are high – not brilliant for using as primary screen for students sitting down in front of them.

Any sort of Group Work involving computers where you do not have more than four groups.

For example you might create a Powerpoint (or a Xerte object) that has a single slide on which you have five images.  You tell the students to order the images (by dragging them) into chronological order.  The value of this activity is the conversation that it generates.  (There needn’t be a correct answer). [This idea comes from Exeter – see last post].

You could do this with pieces of paper of course but you have more options using technology – easy to create and deliver multiple reusable activities. Ability to use multimedia. Ability to mark things right/wrong and give instant feedback including hyperlinks.

Either static map images or dynamic ones like Google Earth or Google Maps.

Students working in groups to find info or solve problems where one large image is beneficial.

Any activity that in the old days used post-it notes on flip charts.

Notes can be posted from the screen’s projector or from the students’ devices (phones, tablets, laptops).

Big advantage is that the end result can be saved and shared and edited later.

Groups could move around the room reading the other people’s boards.

Students could comment on or edit each other’s boards.

With padlet, editing can involve adding media to the notes.

4. Back channel. for engagement.

Using the two screens on the wall same wall, use one to display a presentation and the other to display a back channel (e.g. twitter)

This is a good way of getting students engaged,

Watching a single presentation when seating is arranged in groups and some students are facing away from main projection board.

You want students sitting in groups for a certain activity.

You then want them to watch a presentation (by you or someone else, e.g. a student) but after that you want them to work in groups again.

You want to give your presentation without disrupting the seating arrangement you have.

Because you have screens on 3 walls you can set up the tables at the beginning so students needn’t rearrange their seating to watch the presentation.

Remember though, that small text on slides will not be able to be read from the other side of the room.

If you need to display two screens at once then you might be able to do so on the wall with the two screens. I say might because they are not huge and it depends what you are displaying as to whether this will work.

If you want your groups to be working collaboratively online – e.g. on a wiki – then you might have them using one keyboard per group or let all members of the group have devices.  Each group has a wall screen that acts like the master screen.  It’s easier than to stand up and point or comment on the collaborative piece.

If the purpose of the exercise is to have students discussing a problem and working together it might be better to have them working on the same screen rather than individual screens.

In this room you can have four groups.  The reason you’d do it this way is to have students working together looking at and talking about a single display.

The idea here is that each screen presents part of the meaning of a message.  Students have to move around the room gathering info to construct a text or answer questions.

One thing you can do with the boards that you cannot do with pieces of paper is use media. So one board might be playing video on a loop, another might be showing multiple static images, the third board some text and the fourth a live video link to someone off campus who can be communicated with via Big Blue Button.

Also, because the boards are bigger than pieces of paper or flip charts they are easier to read.

You can have a Big Blue Button video link on one board while another board displays something else – e.g. a twitter feed, the subject of whatever the speaker is talking about.

You might also manipulate the Big Blue Button windows to show the presentation full screen on one screen and the chat window maximized on the other.

Many documentary makers are now adopting what makers of music videos have been doing for a while – presenting multiple messages at once (e.g. two videos plus scrolling text, plus audio).

At the Visual Learning Lab at the University of Nottingham they have experimented with Powerpoint to provide multiple slides at once (see Learning Using Multiple Displays).  In CH004 you might want to try something similar.

The e-learning department has four sets of Qwizdom clickers (audience response handsets).  This means that you could have four groups each working with its own ActionPoint* presentation.

The groups could be working together (i.e. with one clicker handset per group) or as individuals (each student with his/her own handset).

Or you could have all groups using the same ActionPoint presentation but interacting with it as a group. So each group would discuss the question together before voting.

Two of our lucturers run an annual debate in the lecture theatre with clickers.  They display the live voting graphic on top of their slide which shows the two debate statements.

In CH004 you could show the debate statements (and more) on one screen and the live voting chart on another screen.  This might be preferable for two reasons:

If students have work on laptops and need to display it on larger screens this can done in CH004 with each of the screens having its own input port. 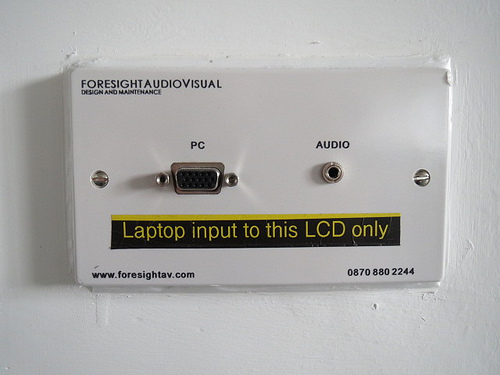 It is also good for the tutor who can move around the room and easily see the simulation without disturbing the students.

At the end of the time period the groups explain to each other where they have arrived at and the consequences of their decision-making.  The live sim display helps to explain the process.

Don’t forget that you may want this room for the flexibility the furniture offers you.

It’s a large room with enough space to move the tables and chairs around into the configuration you want.

Please remember to unlock the wheels before moving the tables as they are likely to break if you don’t. 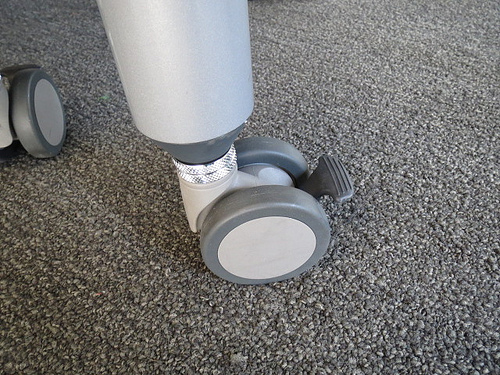 You needn’t be restricted to four computers and four display screens. If your students have their own devices (or can share devices) then they can work on these.

If they are working on the web (e.g. on Moodle, on GoogleDrive, on Mahara, on Wikipedia) then you can display their work on all/any of the four computers/screens in the room.

This is useful if you want to show one group’s work to the whole class.

These quick fire Japanese presentations are all the rage these days and seem to be standard fare at all conference breakout sessions.

If students are presenting in this way, the ability to shift physical focus from one area of the room to another between presentations can increase the drama and excitement and so engagement.

Live games played between groups of students are used for various reasons, e.g.  for team building, to foster collaboration and decision-making.  In CH004 you can set up two simulations with two teams in each.

The teams can work collaboratively and play their opponents – another group sat around one of the other screens and see the game play out live in the wall-mounted screen.

This would take some setting up but is possible and would be so much fun!  If there were  a large important conference happening somewhere in the world that you want your students to attend, you could have up to four live feeds playing on the four screens.  Perhaps you’d stream the keynote to all of them.

You could also have a colleague or member of the class there in person broadcasting live through Google Hangouts to youtube.  This is possible even from a smartphone.

Of course students could be accessing the feeds individually from their bedrooms but by bringing the feeds into a common physical space you can create the buzz of the conference.  You might even organise some refreshments in the centre of the room and provide conference lanyards to add to the atmosphere.

Historian and geographer, writer and researcher

away from the office..

The view from the shed...

Gillett Racing
The Lure of Speed

My thoughts on learning, technology and stuff that makes me tick